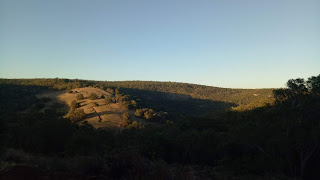 After the bloated Goat last week I had an easy start with a rest day on Monday and no running . The legs were tired.

Wednesday a recovery run of 7.5km at lunch time

Saturday Start of double runson weekends.Went to Wungong Dam started early with a 22km run planned.No one around but 30 minues in a runner came by Rick doing bloated Goat .He was going fast . I did the first half of Bloated Goat then ran back to do the last 2 kms of the route for 22.5km .Got a bit lost but managed 1050m in about 3.5 hrs of running.Not as fast as last weekend but felt better today. Noone at the finish .Rick did the whole 30 km and finished at the same time so he would have done at least a 3.20hr course time . He was aiming for UTA 100 in under 14 hrs.

Was a nice cool day although it did get warmer at the end.

Sunday A double run weekend so headed to Walyunga National Park Had a late start as Molly was bitten by an insect and had to take her to the Vet for an injection. Started at 8.30am and again was a good morning for a run .I did the longest trail around the Parkand climbed the first hill twice . Finished 15km in 2.12hr and got 524 m of elevation on the Garmin.