After NorthFace and the French Alps Cycling adventure , it is now back to reality and the start of a 15 week training programme for Ironman Busselton 2015. Whilst time is at a premium and I don't expect a spectacular breakthrough PB , it is still important to go into a race prepared as well as possible. The old adage How do you each an elephant ....one bite at a time , applies in training for an Ironman race.


In doing so I have tried to apply a more systematic approach to preparation even if at times life and human nature conspire to intervene in goal setting. By that I mean nothing ever goes to plan and we humans are fickle creatures. A lot of what determines success (achieving your goals within your abilities)  is simply down to 3 issues in my humble opinion.

The first 2 can be controlled and the last is happenstance as to pure chance that we all can get ill, family issues ,  accidents and basically the world ending before Busselton Ironman. In which case really we discover rather late that we probably didn't have our priorities right. In this respect whilst important to prepare it is important to keep everything in perspective. Life doesn't stop . As such , I have found the first 2 issues intertwined and over the years my perspective has changed. The desire to do a PB is somewhat mollified by the fact that the emotional desire has wained over the years. There are I believe just so many Ironmans in us before it becomes a little jaded and possibly the body starts rebelling at the onslaught of training .I may be wrong because there are many who have done 50 Ironmans or more.The body yearns for a new challenge but not necessarily more training.Time is precious I noticed as we get older.

In this mental state I have decided to plan the preparation a little better although starting has been slow with the cold mornings and spring still a week away. I have however got a coach , Katy Duffield a professional Triathlete in WA and racing the Worlds 70.3 2015 in Austria  on  29 August 2015. The last time I had a coach was way back in 2012. If anything it makes a change and for an interesting programme with some impetus to actually train .I am still prone to skipping sessions but I think with a coach and a programme it is hopefully less likely.

Why get a coach and how do you pick a coach .not easy questions and a coach does not absolve or diminish the responsibility of the triathlete to listen and follow the instructions and ultimately undertake the task set out .Simple but never or rarely followed. Half the battle is doing the task and not more and not less. I am guilty but hopefully in the next several weeks I will be disciplined.

I have looked back at the many post and the theme is repeated.

The Fundamentals and taking Responsibility :

My Take:
With this in mind , the journey begins yet again .The first week started easy enough with just a swim and a run . Unfortunately with the winter weather lingering around and rain I have skipped the swim . I have continued with my cross fit and did 3 sessions and then on Saturday a 110km ride in the hills and a run on Sunday for 1.20hr doing 11.5 km at a steady easy pace . As my programme starts at the end of the week I have kept to the routine and continued into the programme. With Sunday being a run at even pace. There was nothing on the Saturday but it is the long ride day so I rode with the North Coast group into the hills. First ride on the TT bike and found the hills a lot more bearable despite being slow I found I was coping and not fatiguing at the end. It was a long 5 hour session with 110km  and a 10 minute run off the bike . In the afternoon , I had my cross fit and that was tough .Just 2 rounds of the list in the picture. Dead lifts, sumo high pulls , Cleans, push-press, clean and jerks and between each exercise we did squats , push ups, burpees , start jumps and thrusters . Took 30 minutes for 2 rounds and I was done.  I start the training build at 74/75kgs , hopefully getting to 70 or less in weight in the next 4 months. The fun begins . 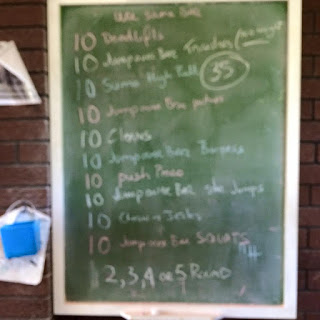 The trip has come to an end .What better way than to race , no participate , in the Alpe D'Huez Triathlon on 1 August 2015 ,its 10th anniversary year.I always thought it was older but was wrong.

Being up here in Alpe D'Huez was a great experience and having ridden the famed climb was hard but memorable and so I know what Iam in for before the race.It has been a magic end to a great trip of cycling and experiences I will remember for a long time. The weather has been largely warm but the night before I was treated to a lightning and thunderstorm over the mountains , rain and a blanket of clouds below the town . It is cool and hopefully the swim will be bearable.

After the TDF and the massive crowds on the climb are gone ,the only mark are the chalk marks / paint with words of support for the cyclist .On Friday I watched the long course participants and the first cyclist reaching the town and the last cyclist at nearly 5pm in the evening . You could tell it was a hard course to do .by chance as I was wondering around I saw someone who I though looked like Chrissie Wellington as it turned out it was her .She looked well and the way I remembered her back in 2006 when I first saw her at the Ritz Carlton in Singapore where she was racing the 70.3 just after winning Korea Ironman and about to do Kona in October and win her first World Championship. I assumed it was a lookalike and never thought it would be her . Would have loved to gone up and just said hallo.

Here is a short excerpt on the Triathlon from Wikipedia:'

"The Triathlon EDF Alpe d'Huez, named after its sponsor EDF, was established in 2006 by World Triathlon Champion Cyrille Neveu[1] [Note 1] is one of the most prestigious and popular French triathlons among the non ITU and non FFTRI competitions. It starts with the swim at the reservoir Lac du Verney then the cycling features the famous 21 bends used by the Tour de France as it climbs 1120 m to the ski resort of Alpe d'Huez for the run."

With possibly the highest transition in the world for a triathlon.

The race day started pretty well as it was an afternoon start . So no rush and just getting everything ready .I had breakfast and then at 10 dropped my running shoes at the T2 Transition area at Alpe D'huez and next to the finish line .Probably the highest Transition for a Triathlon in the world at 2000m.

At 12.30 it was drizzling and had been for most of the morning after the thunderstorm the previous night, there were periods of the fog moving in as well. We started to ride down as 90% of the participants apparently did. It was down the mountain through narrow lanes to the lake where we were swimming called Lac du Verney . With the drizzle and wet roads and cyclist and cars it was just gripping the brakes all the way down with the adrenaline rush from the downhill cycle .Took about 50 minutes to get down and then waited for my bag which Mark (one of the group driving down brought) .I then rushed to get my wetsuit on and sort of missed the race briefing which was in French anyway  and then headed for the lake from T1 .I got into the water thinking that I had 10 minutes before race start. It was about 15C and cold and did my best to get ready in the cold water having had no swim training since Busso Ironman in December. There was no warning and suddenly a gun goes off signalling the start, a mass start of 1200 triathletes . It also seems after the race talking to the others the start was five minutes earlier than the actual supposed start time of 2 pm. I was still about 40 m from the start line and off I went swamped over by the fast swimmers from behind and took  a few hundred metres to get into some rhythm .I then managed to swim reasonably comfortably after swallowing a fair bit of lake water .It was a green hue color to the lake and the mountains all round the lake.It would have been magic but for the fact I was in a race with lots of other triathletes all round me. I got out of the water in 31 minutes not fast but just happy to be out.

Had a slow transition but then I was out on the bike course.My Garmin did not record the first 10 minutes or so as I may have pressed the wrong button . But eventually everything was working and the first few hundred metres was a climb out to the road on the side of the lake and then a fast descent for 10-12 km to the base of the Alpe D'huez through a town .saw one rider down just before the ascent and there was a fair bit of traffic. It was fast with a slight tailwind I think and I was at the start of the climb in about 33 minutes .Then the climb which was slow fort me but I managed to improve on my previous effort and despite the cold and wet weather ,felt good all the way up. There was lots of encouragement along the way. Glad to have finished the 21 switchbacks and get to Transition 2. Did the ride up in 1.36.58 so happy with that .

The run was a 7km part road /trail run with about 500 ft .I just paced myself and felt I did pretty well finishing in 44 minutes with the last 2 km downhill and really passing a few runners. I ran all the uphills as well even if a little slow. Did the whole race in 3.32 . Not fast but given the training very happy .

I was glad I did the race despite the weather .It is one of those races that you must do like Escape to Alcatraz and the New York and Chicago Triathlons for the fact of the stature of these races and for the Alpe the brilliant location. Everyday I got up and saw this amazing picture of the mountains and clouds and sky always changing . 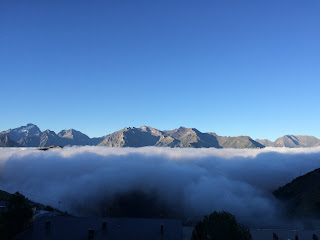