A month to Ironman Busselton , still not stringing any consistent training. It was a week of easing back after no training last week.

I managed to run on Monday and did Cross fit on Tuesday , then on Wednesday I ran again doing a 10km run with 6 x 1km at 5 minute pace at lunchtime. On Thursday I did a hard cross fit session, no riding and Friday had an easy run . Saturday I missed morning training ending up sleeping late but made it to Cross fit. I did ride on Sunday when everyone else was racing Mandurah 70.3.I was planning on watching the race but had to put in a long ride training session. I managed to get in 105kms in 40C heat . I ran out of nutrition and water so had a coke at Metrio and my wife picked me up as it wasn't really worth riding the rest of the way home in the heat. Only the 2nd time ever she picked me up but I suspect more out of concern that I was riding in noon Perth traffic then the heat. In the afternoon I ran 10kms in the heat and the legs were well and truly cooked.

I had the next 3 days to recover as everything was very sore.I had a massage on Tuesday and that helped but could not bend or walk let alone run. In hindsight not the best Sunday training day especially as the legs were sore from cross fit the day before. There were only a few riders out on the course so it felt pretty quiet on the bike path . I had a good strong wind on the way back and the heat . My next training session was Thursday 13 November with a cross fit session , I then did some stairs with Boris and crew on Friday and on Saturday we rode the freeway . I missed them at the Narrows start but eventually we all made it back . I had a puncture near Paganoni Road and wasted 2 cannisters as I kept unscrewing the valve as I tried to disconnect the gas connector from the valve. Had a fellow triathlete stop and help me. Rode the rest of the way with no cannisters and no pump. Hard day but the legs felt a lot better this ride than last Sundays . My garmin switched off after 21kms so I had no idea how slow or fast I was going .I just tried to keep it as consistent as I could. Lots of people calling out but they were so fast I could not really tell who they were but obviously everyone was out on the freeway bike path. I even got touched up by someone on the BYL crew riding past. Not sure but they were motoring back at near 40kph.

I ran a short run ,just under 3km off the bike , then had coffee with Lindsay and JD . In the afternoon it was cross fit ladder of exercises with weights .Iam glad I used 20kg especially with the overhead squats as the legs were sore. Managed the full workout getting up to 9 repeats for each of the 7 exercises we had. On Sunday got to City Beach for a mini triathlon but with the Open Water swim happening we ditched the swim and did a 32km bike ride and a 10km run. I have not had any Ocean swim training since the Half Ironman in May. The ride and run brick went well. I felt pretty good on the bike and managed to run at least 5-6 km at 5.30 pace and the rest at  under 6minute pace. Despite  the slow start to the week I managed a few good sessions.


Like all great plans , this was hatched early in the year with the intention of a more diverse training plan and a bit of a mini training camp similar to the few days I spent at Margaret River last year riding .It was fun .

This year I thought the Cape to Cape MTB , a 4 day event would be good preparation. I managed to convince Tim to tag along and be driver , bike mechanic and support crew. I did forget that it was a MTB race and my one ride on single track probably was not enough preparation. It was not technically challenging accept that there were lots of scary bits , lots of steep climbs (which weren't climbs because everyone I was riding with got off their bikes and walked up the hills) , and I fell a lot.

Overall it was a great experience, another subset of the endurance fraternity and some definite lunatics.

The Cape to Cape started of on 23 October 2014 at the lighthouse at Augusta. By the Thursday morning , I had already done one wind trainer session of 40km , a run on Monday of 9km .On Wednesday I did not manage any training leaving work and heading straight down to Margaret River .On Thursday it was a late start so I got in a 7km run on the beautiful trails around the town, then drove with Tim down to Augusta .Great day with a short 42km stage .Was told it was the toughest section. I started out at the back and my aim was to finish. I had a great bike , a Giant XTC hardtail MTB which I picked up second hand .A great light bike , the rider was quite a different story.

The race started close to 1pm and it was an immediate 4km ride on bitumen up hill and then down through a steep sandy trail . It was constant undulation with a number of climbs through the bush being so steep I saw everyone dismount and walk up . I came off the bike more times then I care to remember and had my heart in my mouth on a number of the downhill sections as I was just so worried about coming off .

The beach scene was spectacular but again walking over a km was tiring (see 1.14 on the vimeo footage )

In the end I was covered in dust but made it through the first day without any injuries.Just pretty tired after 3hrs 40min . I did a short run after the ride and the legs were feeling it. 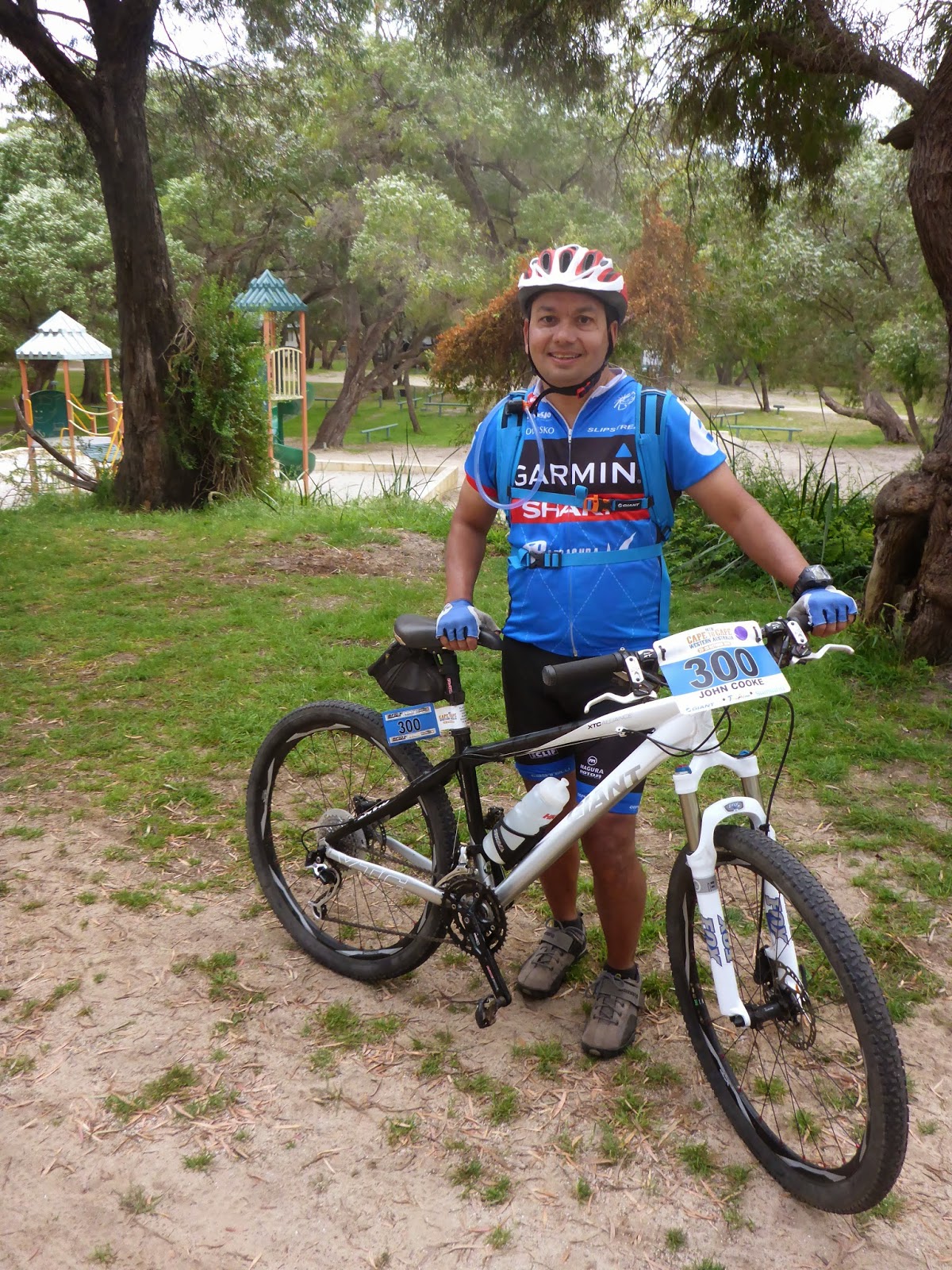 Day 2 , A new experience backing up the first day on the Mountain Bike with another MTB ride. Today was a 57 km ride less taxing than day one and lots more trails and single track in the Boyanup Forrest .It was a great day of riding and there was some limestone tracks and lots of sand as well but I got through it feeling a lot more comfortable. Every time we hit a road or fire trail I got better and more confident then the true mountain bikers . I enjoyed the day a lot more and we finished at Xanadu Winery . I finished in 3.25 and rode back to Margaret River another 6.5km ride.In the morning of Day 3 Tim and I rode to Xanadu for the start. We had a mass ride through the town and then a start from just outside the town. This was the more technical of the rides with more single track. It turned out to be great but I came off at the start on gravel and took a fair bit of skin off.After the technical sections and with just 2-3 km left to the end I came down hard on a sandy downhill track hitting my neck and right shoulder and again more cuts on the right side. I finished really slow and hurt . It was a hard night as I could not turn or move my sore and stiff shoulder. Finished in 3.40 hr at the Colonial Brewery just outside Margaret River.Day 3 Garmin Link

Day 4 was one of just trying to stay upright .  I managed that for the 65km but was really slow. It was a great ride but for the sore muscles and painful neck and shoulder. I enjoyed the more open trails and some of the single track with great names like middle earth . I had 2 punctures the last just a few kms from the finish line at Dunsborough Country Club.Lost a fair bit of time changing the flat. The volunteers on the course suggested I use a tubeless tire next year. In the end I was glad I survived , had a ball with Tim and the great people we met along the way.Saw my old Boss Pino who was spectating on the course.We had some great dinners at Xanadu and Colonial Brewery.Day 4 garmin link

It was a great week of training and but for the falls and lack of MTB skills,  turned out to be good week of biking. I had nearly 15 hours of riding and a bit of running at the beginning of the week and on Thursday .

Unfortunately the next week was spend recovering from the cuts and gravel rash and sore neck and shoulder.I had a Doctors visit , antibiotics , pain killers and anti inflammatories. So week 25 was a forced rest week with no training . 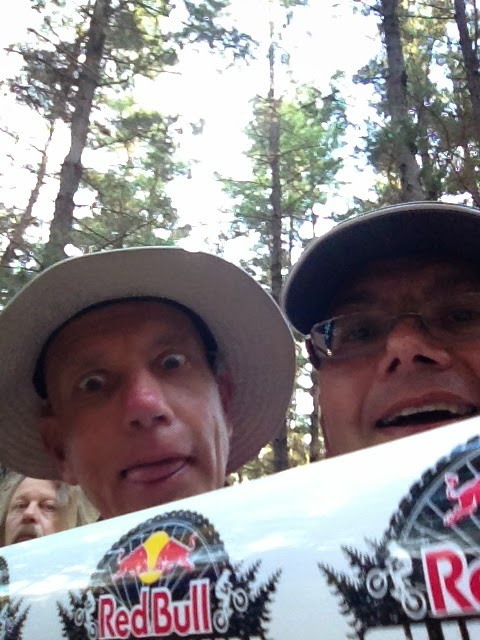 
A little late as it slowly draws down to Ironman Busselton.I have had a mixed and far from perfect preparation largely put down to just motivation. Everything aches and hurts and I have been feeling my way through a mix of sessions trying to get the right amount of rest and recovery with specific workouts mixed in with cross fit .It has been largely hard as the sessions have all overlapped into the next and made trying to get the most of what I had planned done difficult.It had been a little hit and miss and primarily this years race has not been such a priority . I have succumbed to everything else in life being important and so sessions have been missed due to just a lack of motivation to push through. It is a balancing act and mentally I have not been as focused.

This past week I have done my usual run on a Monday at lunch . just an easy 9km run .On Tuesday I did my wind trainer session 40km in over an hour using the Sufferfest DVDs. Wednesday had a run at Lunch and a swim in the morning ,one of my rare morning sessions covering 2.7km . On Thursday skipped the ride and did cross fit .I was pretty sore the next day but swam in the morning again doing about 2.5km and ran at lunch an easy 7 km .On Saturday I did a long ride tagging along with Exceed riders doing the freeway ride . Got dropped and rode mainly on my own for the 130km ride .Wasn't fast and felt quite tired at the end. I wasn't exerting much power as well so may have just been tired . I did manage to get to Cross fit in the afternoon .

Sunday I decided to just have a rest day.