The coldest winter July with quite a few wet days is now coming to an end .Not the ideal training weather for a humid and hot race in October but its got to do . I have had the advantage of being able to train late on the weekend and I have been doing just that and getting lots of sleep.

On week days this week I have had 2 rest days ...the fatigue and mental tiredness with work just meant I needed to have a break. Monday , I skipped the swim and allowed the body to just have a rest .Tuesday I skipped cross fit and did a wind trainer session with a road trainer programme ..Really pushes the legs . I managed a programme called Sill with 9 minute blocks at 200 watts and spikes of 1 mins x 3 at 222 watts . There were 3 blocks of 9 minutes . Felt pretty cooked after that .

Thursday, I rode with the intention of riding to cross fit but the wind and rain changed that . I rode the 34kms home and did a 30 minute recovery ride on the wind trainer . In the afternoon I did my Wednesday run with just under 9kms .mainly keeping to between 5.45 and 5.08 pace .

Saturday .Late start and the legs were really sore so I had 1 hour on the wind trainer and then a 4km run and cross fit in the afternoon .We did Bring up sally which is usually a squat WOD but this time we did various variations with sit ups, squats , lunges , planks and leg raisers. they all hurt but its good for the core.

Inverted the training and did the long ride today and missed my long run. Today I started late again but the temperature was hovering at 3 degrees and it was cold .I headed for the hills with a 71km ride to Mundaring Town through Helena Valley . It was also a little windy . I felt pretty comfortable and there were a few steep gradients on the ride today .Saw quite a few cyclist about . I managed to get to Mundaring in just over 1.5hrs and then rode back really pushing especially on the downhill leg . I managed to ride back with the Midland cycling Club juniors who were riding near Helena valley . I finished with an average of just under 25kph which was a little better than last year . I ran 5.5 km off the bike keeping to about a 5.50 pace. In the evening I swam a straight 2.5km with the PB and then ran home .

Whilst not following the programme I drew up exactly I am getting some strength work in and next week is the start of some speed work .
Posted by Cookie Monster at 9:42 PM No comments:


Creedence Clearwater -Who will stop the rain

The last few weeks of the build phase with rain pushing the training indoors.

The weeks are all merging into a blend of the daily training grind in the cold and wet days. The swimming has been the hardest to adjust as there is so minute a change or improvement.  Getting back to basics of just getting my position and breathing right has been the hardest.

Tuesday : Ride round the river with Exceed group.It was their easy week but the front group dropped me at Stirling because of the lights and I was on my own for the river ride never seeing the front or the back of the group. 45kms done. In the evening it was a 45min cross fit session .

Wednesday Just a run with 50minutes with 10 minutes at moderate pace and 10 minutes hard which for me was about 4.35 minutes per km. I skipped the swim today . Thursday I did a wind trainer session for 60 minutes using Road Trainer and did 3 x 7 mins @ 225Watts . Hard session . Ran at lunch time just doing an easy 4km run.

Saturday .Weather was bad again and so it was an hour on the wind trainer . I just couldn't manage a 3 hour session as the legs weren't working. I did run to the pool and swam 1600 m and then ran back before going to cross fit so I still ended up with a solid nearly 4 hour session with the cross fit .

Sunday .Again really wet conditions meant I did another wind trainer session with 2 hours and then a 7.5km run off the bike .

Felt tired on Monday so had a rest day no swimming.

Tuesday : I rode indoors with a hard 75min wind trainer session with 4 x 8 minutes at 225 watts . Then a short 2km run off the bike.

Thursday : Rode to Cross fit and then a clean and jerk session to a max of 50 kgs and then rode home .Friday Rode to work and swam in the evening with 2.5kms and ran an easy 6kms .

Saturday . I had a late start so I did another wind trainer session and the weather wasn't that great . Rode at about 170 watts for 70 minutes out of a 75 minute session and then ran 5kms and swam 2000 m before cross fit where we all did various versions of bring up sally (see video below) without the weights including lunges , push ups , squats and the leg lifts below with some of them repeated for a good 45 minute session .After the day of riding and running the legs were tired.


Sunday : Weather was still not so good with intermittent rain .I started late with a wind trainer session 60 minutes with 4 x 6 minutes at 205 watts and then ran for 10kms with 6.5 km with Molly which was a little slow. In the evening a 2km swim without the PB .

Slowly feeling a little more comfortable with the swim even though I am still slow . 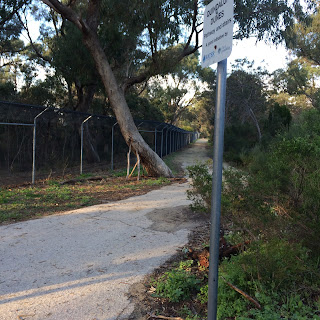 Week 4 , No let up in the training and still about 15 hours of training although I have had to vary a few of the sessions with work and tiredness .

The week began with a good swim workout and a chance to recover from the weekend .I had only an evening swim to contend with on Monday . Did 2.3km with 400 warm up, then 400 with 4x 100 at moderate pace and 60 x 25m at varying levels of exertion .I did not do a cool down as I was pretty tired at the end.

Tuesday I skipped the ride and switched to an ergo session using Road Trainer with 15 mins or 5 x 3mins at 254wattts .Found it to be short but a hard session. Wednesday with work commitments I skipped the run and swim.

followed by 35 squats for time .

Friday .Rode to work and ran in the afternoon and swam again in the evening just a straight 2km swim with a Pull Buoy.

Saturday. I managed to get out of bed .It was raining early morning but stopped. I decided to get to the narrows to ride with the Exceed group heading to the hills . 5 km into the ride the rain came back and I got to the start and fortunately it had stopped. I had a rain jacket a long sleeve cycling Jersey and my Exceed jersey , but it was still pretty cold. It remained reasonably light rain till Roe Highway some 27kms into the ride for me when the rain got heavier. The group started their hard efforts and I got dropped almost immediately .There was no point trying to keep up. The rain was pretty heavy in parts . Ross passed me on the climb up Welshpool Road .Fortunately it wasn't raining then.I passed some riders from Break Your Limits fixing a puncture and the rest of the group were waiting for them at the Petrol station . The 3 riders quickly passed me as I struggled at 10kph up the hill but the legs were not feeling too bad . It was about 2.5 hours into the ride as I headed into Pickering Brook and then I rode the next 25kms round to Bickley and Kalamunda Town . The last climb to Kalamunda was a good gauge of the progress as I had done the ride many times and felt good...just not fast.

Stopped at Le Croissant fro a quick coffee and then the rains came back . Rode down the Zig-Zag and back home through Guildford. I then ran with Molly off the bike , an easy 3.5kms .
In the afternoon cross fit with a 45 minute session . The legs were tired.

Sunday . Skipped riding again and ran at Carine for 75 minutes really easy again 9.5 kms and then swam with Arie giving me some pointers on my body positioning and follow through with the arms . swam 1.5kms

Had an easy week with a ride, a swim and just cross fit to try and recover from the sore legs and a bit of fatigue.Did less than 4 hours for the week but think I needed it.
Posted by Cookie Monster at 8:56 PM No comments: